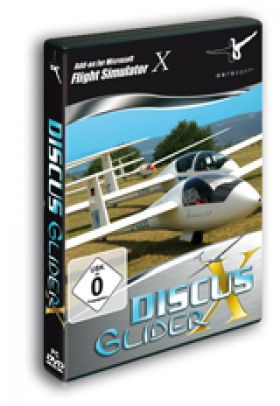 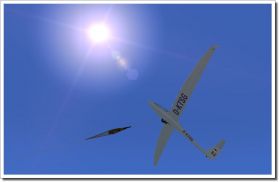 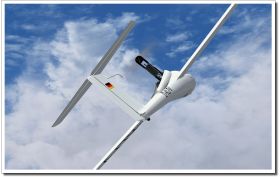 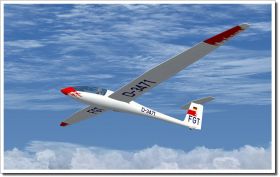 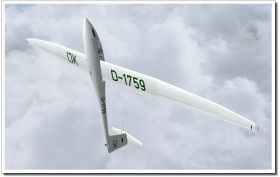 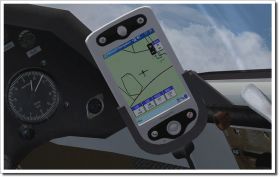 
Do not think that gliders are boring and silent machines. The Discus is capable of speeds, altitudes, range and aerobatics that make most GA aircraft envious. Of course you can choose to make flights of many hours but you can also find some ridge lift and play around for a while. The Aerosoft Discus is a high end simulation of a high end glider.

The Discus is a Standard Class glider created by Schempp-Hirth. It was produced in Germany between 1984 and 1995 and around 850 aircraft are still flying. It is still produced in the Czech Republic in low numbers. With its distinctive swept back leading edge it was rather revolutionary when it was produced and it totally dominated the standard class sailplane racing throughout the 1980s and won the 1985, 1987 and 1989 World Gliding Championships.

Though it is no longer a top contender for the prices (the progress in gliders in the last 10 years is nothing short of amazing), it is still a high performance glider with a 42 to 1 glide ratio. The good natured flight characteristics made it a perfect club glider for the experienced gliders. The later models (though many are retrofitted) had winglets that made the performance and handling better. In Europe it is one of the most prolific gliders and it is very typical of gliders that the thousands of enthusiasts fly every weekend.

The Aerosoft Discus has been create with help from Schempp-Hirth and without a doubt it is the first true high end glider add-on for FS. From the flight models that are near perfect (do note we never used these words for any product before) to the C4 Flight Computer that is the heart of the instruments it is all so accurate that we feel 100% confident to provide the customer with the `real` manuals, of course with permission of the copyright owners. There are ten models included but they can be divided into three base models. We got four B models that are pure gliders, four BT models that got a small engine that allows the pilot to cruise between thermals and two BM models that allow the pilot to take off on its own power. All ten models got different flight models. As FSX does not allow any motorized aircraft to be air towed we even include the very realistic WinchX! add-on that simulates a which launch down to the smallest details. This is a very complete project that will give you all options modern glider pilots got.